The Rachel Scott Story Was Penned & Compiled By Peter O'Neill 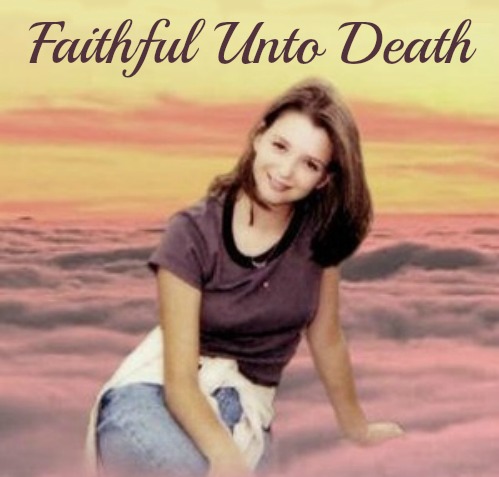 Rachel Scott's story starts with a little girl raised in a good home... a little girl that grew to love the Lord with all her heart. It finished with her as a young lady who was forced to make a decision to either stand up for Jesus & die... or deny Him & live. 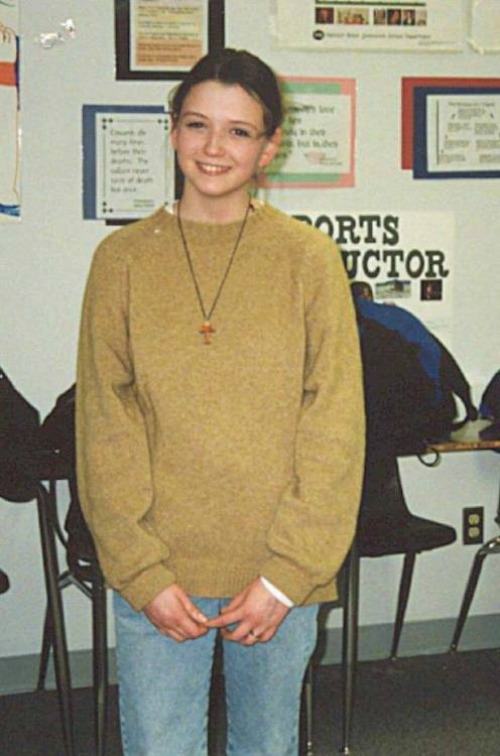 Rachel didn't understand all that was coming, but she had a strong premonition that she would never live to be 20 and that she was supposed to do something special that would touch this world for God! That Somehow She Was Supposed To Be... A Bright Shining Star That Would Move Millions For Christ! 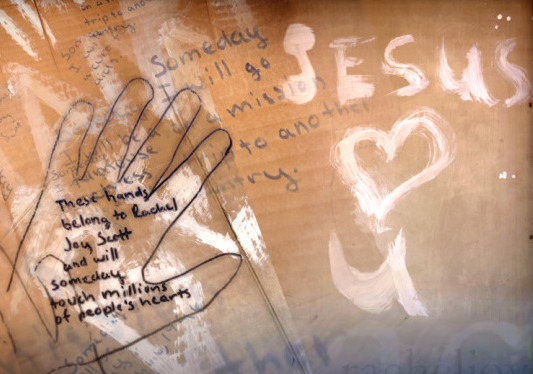 Words Written By Rachel Scott after tracing her hands on the Back of a chester draw... "These hands belong to Rachel Joy Scott, and will someday touch millions of people's hearts".

Rachel took a definite stand in her High School Years, realizing she had to put the Lord 1st even before her friends. She faithfully witnessed and though she was a really popular kid... her witness was not always well received, but she witnessed anyway. She felt that by kindness and love she could create a chain reaction to make this a better world and she dreamed of one day going to foreign lands to be a missionary.

As you know, no missionary can just turn it on and turn it off... You have to have that burning love of Christ with-in you that compels you to reach the world... and Rachel Scott did.

Little Is Much If God Is In It

In Her Short Life... She Did Far More Than Many Do...With A Full Life Of Abundant Years. Her time here was shorter than most... BUT... Little Is Much... If God Is In It... And God WAS In Her Short & Precious Life Here!

They Hated Her For It

Two of the kids she witnessed to were Eric Harris and Dylan Klebold. They were probably the lowest of the low in the school and no one wanted to fool with them, but Rachel did. Three Weeks before her death she tried to talk to them and encourage them to stop a lot of the hateful, weird things they were doing and she tried to bring them to the Lord... They hated her for it and she became a target of their insane demonic rage.

Over those next three weeks she knew that time was short... she felt it in her gut. Rachel's Diary... which is a whole other story in itself, describes in detail that she didn't understand what was going to happen, but that something was up and she wouldn't be around for long. She Told her frinds and wrote in the diary that some kind of sacrifice was going to have to be made and she said "she was ready to make it." On the Day of her death Rachel Scott wrote in her diary Lord this is the end... I've gotten what I can." 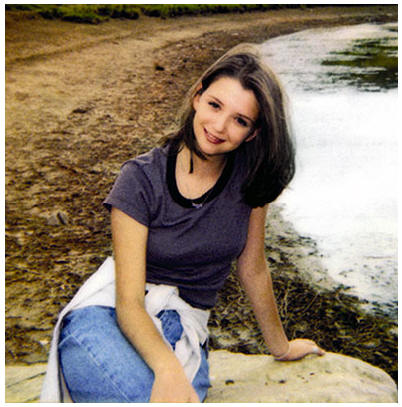 Her final drawing inspired a book, written by her parents, called "Rachel's Tears". That drawing was a picture of her eyes shedding 13 tears that touched a rose and turned to blood drops. The rose is growing out of a Columbine plant and is connected to a verse from the Bible that says, "Greater love has no man than this, that a man would lay his life down for his friends". John 15:13 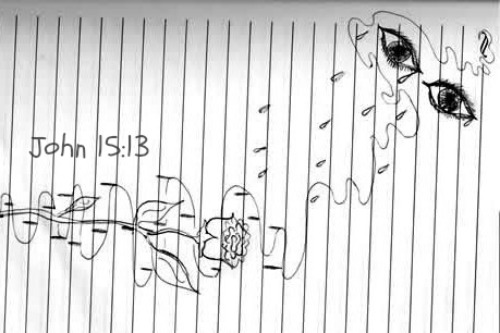 Weeping Students Gather
Around Her Car
After Her Death 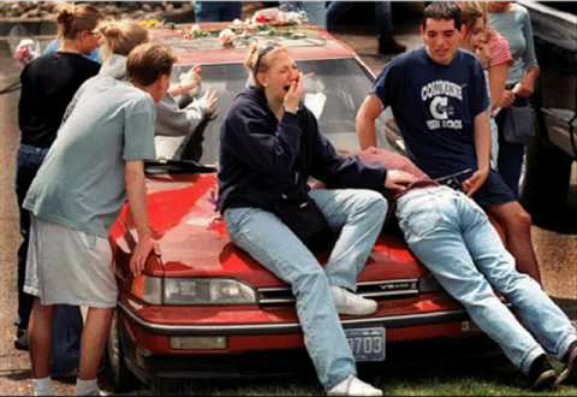 Rachel's Dad...
Tells Her Story In His Own Words

When Eric & Dylan entered the school and started shooting people, she was one of the first in harms way. Before they got to her they grabbed a kid who was witnessing to 2 other students... (the 2 students had just prayed to get saved) and they shot him... then they shot Rachel twice... 1st in the leg... then in the back. Realizing she was still alive Harris walked over to her and lifted her up by her hair and asked her if she still believed in her God.

Her Response Was
An Unwavering... Unfaltering...
"You Know I Do”
Upon Which He Delivered The Final Fatal Shots That Took Her Life. 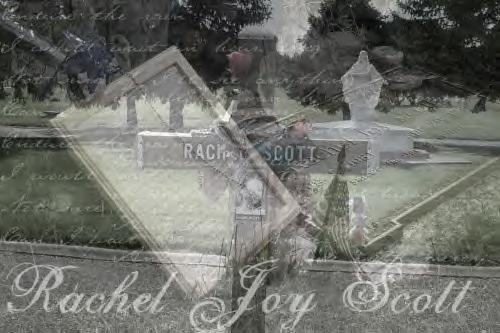 This Young Lady Died in Faith, She didn't whimper and whine, She Looked the Devil in the Face and said "To Hell With You" and gave up the Ghost to God! Courage in the face of death and in the face of evil. Courage to do what was right... regardless of the cost! What Will Your story read? What Will Your Last Words Be?

May We All Be So Brave
And Faithful 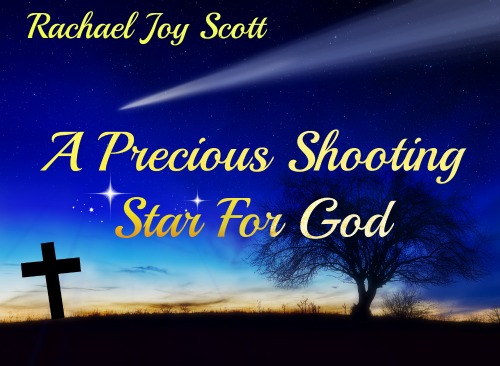 The Coward Dies
A Thousand Deaths.

May We Live & Die For Jesus
And May We Never Forget the Sacrifice
This Precious Child
&
Those Like Her,
Made To Teach Us That Lesson 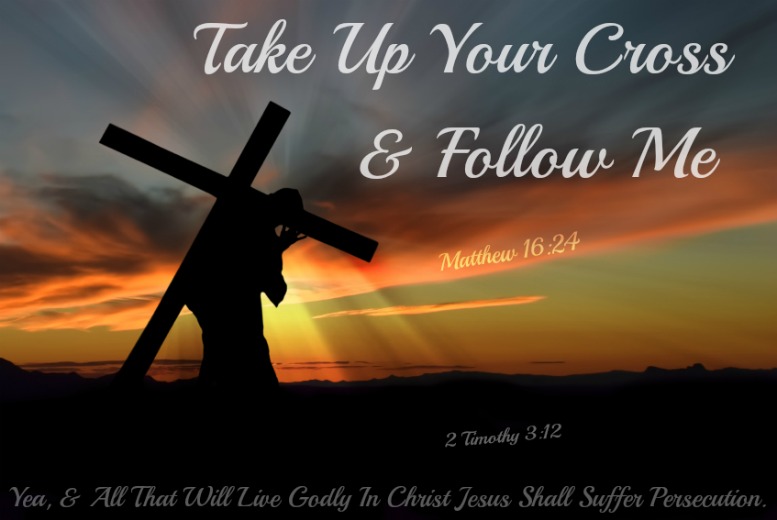